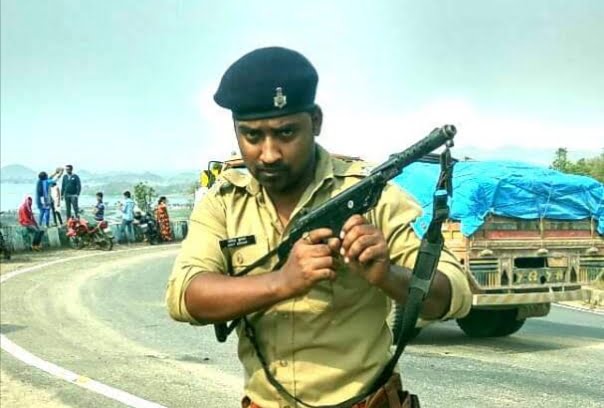 Rajesh Bonik is an actor live and brought in Dallirajhara, Chhatisgarh. He has done some feature films and having prior experience in Theatres as well.

His family consists his parents and a younger brother. His father’name is Govind Bonik, his mother’s name is Bokul Bonik and brother name is Bhavesh Bonik. Rajesh was born in 3 January 1985 at Dhallirajhara, Chhatisgarh.

He completed his schooling from Chiklaksa Govt hindi medium school and he completed his B.A in 2008. As mentioned earlier, he had done some feature films such as Gullmakai as junior artist in 2014, Haunted resort as lead villain in 2015.

He also worked as local prodtion work for film Newton in 2017 and his upcoming project in which he is playing double role of a villain and a gay which is scheduled to release this year by the name of mumbaiya the mumbaikar.

Rajesh is from theatre background, and had been a part of it for 2 years until, he started his journey in acting back in 2013. About his family background, his ancestors were from Bangladesh and Rajesh is belongs to typical bengali family which came to India in 1971 after distribution.

Then, his family came to Chhatisgarh and stayed as refugee. Rajesh was never fond of studies and always been targeted by his teacher and been told that he could’nt do anything in his life but ofcourse, Rajesh had other plans, he had keen interest in dancing and mimicry. So, one day his friend told him to join theatre. Then Rajesh joined theatre classes in Bhilai.

Where famous director Anurag Basu used to do theatre under Shri Subrto Bose ji as he is idol and mentor to Rajesh. As mentioned earlier, in 2013 Rajesh started off his journey but it went full of struggle and difficulties.

In his initial days of struggle, Rajesh used to eat only Vada pao to survive and came to Mumbai with only 2000/- rs in his pocket. He struggled alot and at point of time he did not even had a roof to sleep but ever after all the hard time.

Rajesh never gave up and keep moving forward until he gets his first break in 2014 under director Amzad Khan as junior actor ( his other projects have already been mentioned above in the article ).

He also worked with in the likes of actor Ravi Kishan and Sanjay Mishra. He worked in Oscar nominated film,newton, local prodtion team 36garh forests in 2018. He also had seen in actress Jayapradha starrer film named Badhai do beti huyi and also did one muslim character in Sanjay Mishra and Deepak Dobriyal starrer film Kamyab.

He had also worked in one regional Chhatisgarhi film ‘ Super hero bhasa’ as lead villain and at last, He also worked in hindi movie named ‘ Sayya the mystery’ as role of an astrologer. Which is going to release on MX player OTT platform.

As an inspiration he idolises great of indian cinema such as Nawazuddin Siddique, Late Irfan Khan and Salman Khan. He further added, that in indian film industry you need to constant and hardworking along with positive thinking. Never let negative thoughts ruin you.

He also conveyed a special message for all aspiring and new actors that the world is like theatre where everyday you will get to play a new character. All you need is to be truthful and follow your dreams. Do acting practice daily and trust the god. Do everthing with all your heart.

He stated about few of his upcoming projects like Mystery Villa which will start in Goa on 1st September. Starring Siddharth Rastogi, Nikhil Sonchiriya as lead actor, Rajesh is starring as lead villain there will one or two foreigner actresses also, under director SK Thakur, one bollywood based on first Chhatisgarh’s prime minister Ajit Jogi, one short film named Chhat- ek junoon which is ready to get on the floor for international film festival and last but not the least, will be working as local director in Digmanshu Dhuliya’s bollywood project, Sayya The Mystery, hindi horror shooting complite.