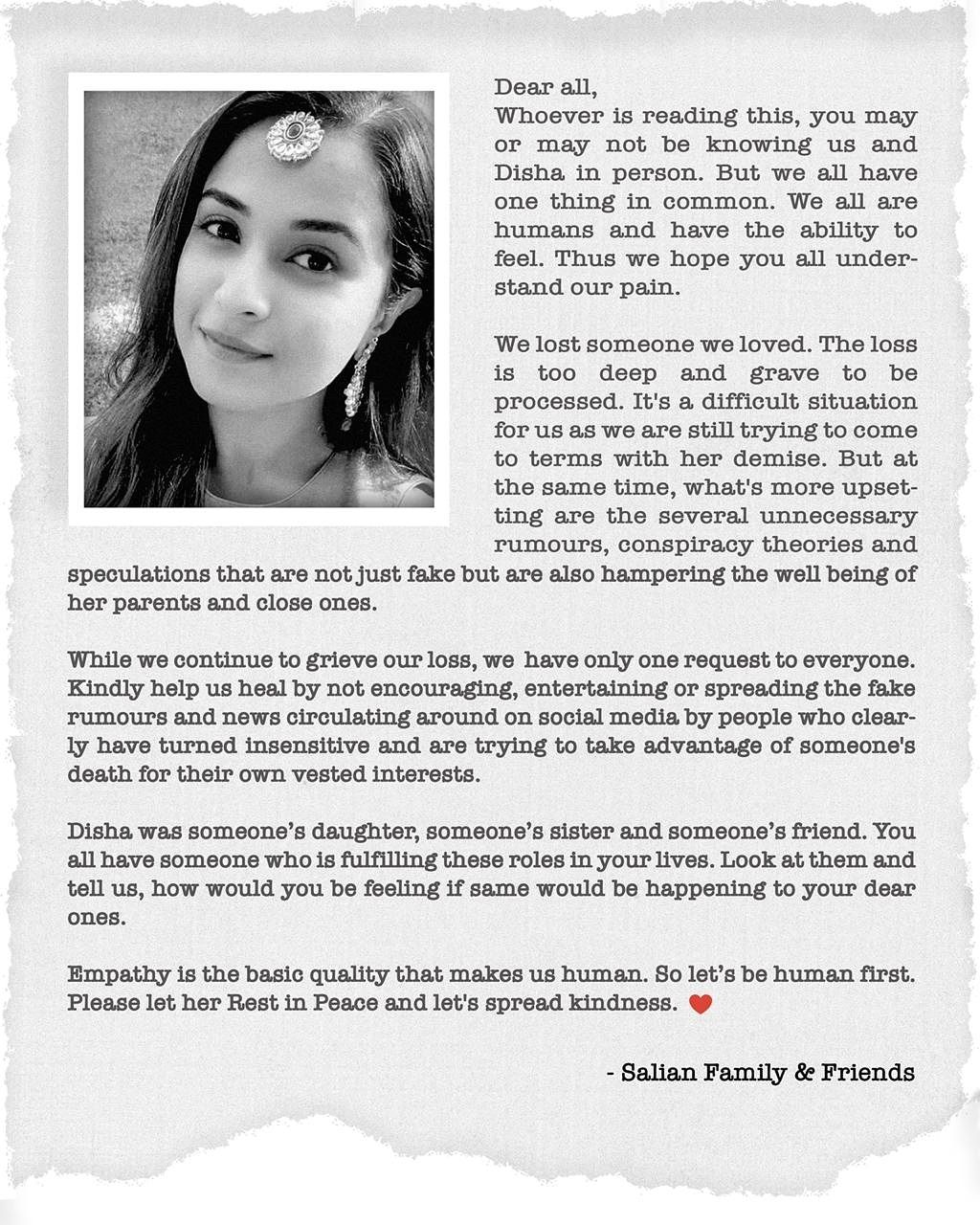 Sushant Singh Rajput’s X manager Disha Salian has been having rumors in the social media for the last few days that her family has been hurt. The statement on behalf of the family has been released on social media, requesting not to promote such rumors and fake news. It is also said that Disha was also someone’s daughter, someone’s sister and someone’s friend.

This statement has been shared by Chhichhore movie actor Varun Sharma. It says- “Whoever is reading this, they may or may not be personally familiar with the Disha.” But one thing is common among all of us. We are all humans and feel. So we hope you all understand our pain. We have lost someone we used to love.

This damage is very deep. We still have not forgotten the sorrow of her death, but what is hurting more than that are unnecessary rumors, conspiracies and speculations. They are not only fraudulent, but are harassing our parents and relatives.

Please, help us prevent such rumors from spreading. Some people have become so insensitive that by taking advantage of someone’s death, they are spreading fake news to serve their interest. Disha was someone’s daughter, sister and friend. There will be someone in your house. Look at them and tell them, how will you feel if this happens to them. Please, let her be at peace.

For information, Disha Salian died on June 9 after falling from 12th floor at her friend’s house in Malad. According to reports, Disha was partying with friends and due to drunken state of equilibrium, she died in death. The police had reported the accidental death. After the suicide of Sushant Singh Rajput on 14 June, his connection in social media began to be linked to Disha’s death. Disha worked with a few other celebrities including Sushant. Suraj Pancholi’s name also got dragged into it.

It was said that she had a romantic relationship with Disha. Some reports even claimed that Disha was going to be the mother of Suraj Pancholi’s child. He also had a fight with Sushant over this. However, in an interview with Times of India, Suraj said that he had no quarrel with Sushant. They don’t even know the Disha. Never met her.

After Sushant’s death he heard about her and felt bad thinking about her family. Someone wrote this nonsense on the Facebook page and made the film’s story.