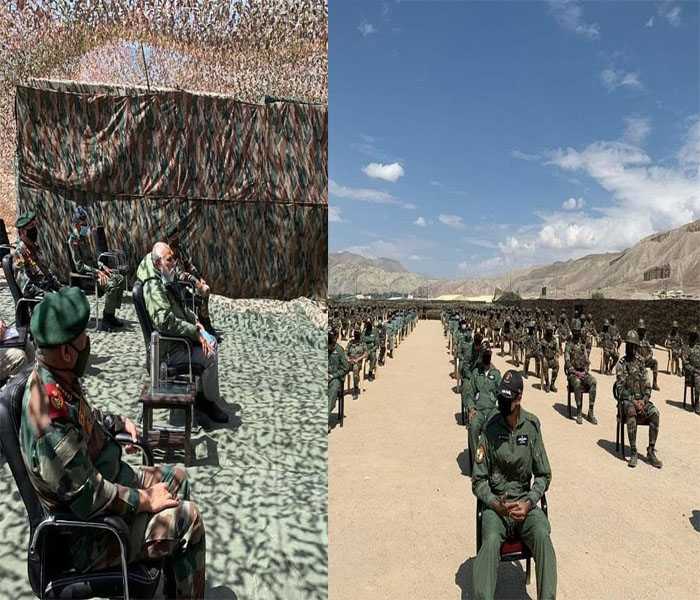 Prime Minister Narendra Modi suddenly reached Leh on Friday amidst the ongoing military tensions with China in eastern Ladakh, surprising everyone. In addition to meeting Army, Air Force and ITBP officers and youth, he also reviewed the situation in a meeting with senior military commanders. He was accompanied by Chief of Defense Staff General Vipin Rawat and Army Chief General MM Narwane.

After reaching Leh, he boarded the helicopter and reached Neemu directly in the middle of Janskar hills. This area is contiguous with LAC. The Prime Minister boosted his morale by addressing the officers and youth of the Army, Air Force and ITBP.

Addressing the soldiers and officers at Neemu, situated at a height of about 11000 feet above sea level, the Prime Minister appreciated his bravery, duty, loyalty, patriotism and spirit of sacrifice. The whole country stands behind them like a strong wall. He applauded the soldiers for giving a befitting reply to the daring of the enemy and said that the entire country is proud of them. He said that all basic infrastructural facilities and state-of-the-art weapons would be provided to all the armies and paramilitary forces.

After addressing the jawans and officers, the Prime Minister reviewed the current situation in East Ladakh in a meeting with all senior officers. He also discussed the strategy of dealing with China and directed to speed up operational preparations in the forward areas. He directed to expedite the construction of strategically important bridges, roads in the forward areas of Ladakh and said that the lack of funds will not be allowed to come in the way.